Foundation 4.1 brings a bunch of improvements to make Nutanix deployments even easier.

“Always upgrade and use the latest available version of Foundation” prior to your deployments.  Each new version has new features (like the below) as well as additional new platforms and software supported by Nutanix. If you are using an old version you are missing out !

Foundation Release Notes help determine which method to use

Upgrading is easy. Download the tar.gz from the support portal. In Standalone VM Foundation, click the version number and follow the prompts. In CVM Foundation use the java applet to upgrade the inbuilt Foundation on the discovered nodes.

CVM Foundation and Standalone VM Foundation in 4.1 have a more unified UI and workflow. However, Standalone Foundation VM is the only method that allows you to manually add nodes (instead of using discovery) or abort an in-progress imaging session.

Range Auto-fill option has been moved to the “Tools” menu to keep the default UI clean.

Standalone Foundation VM (via discovery) can image nodes or create a cluster without IPMI being required. This mirrors the CVM Foundation experience in Standalone VM Foundation.

On discovered nodes, Foundation 4.1 can now skip imaging AOS (if all nodes are the same AOS version) and allow you to just change the underlying hypervisor whilst keeping the AOS version as-is. This saves downloading and re-uploading the AOS image file when the AOS version isn’t changing. This is a time saver.

Lets say your nodes arrive from the factory with AHV and AOS version 5.5.1. You do not need to upload a new AOS image during the Foundation process if you just wanted to change to ESXi for example. 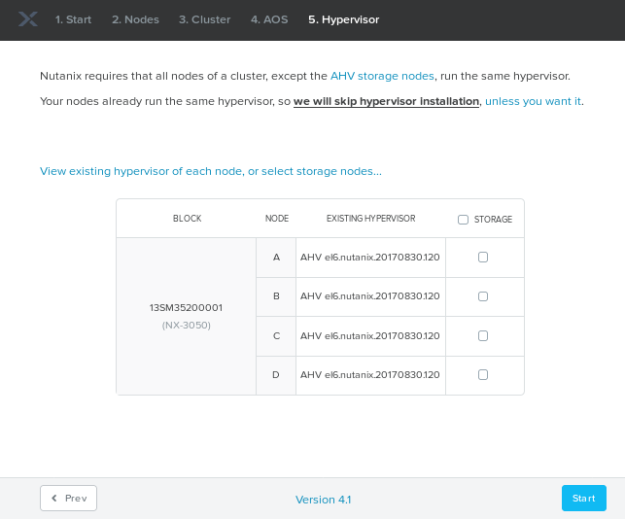 As an example, below I selected ESXi 6.5U1 to change the primary hypervisor for the cluster. By default Foundation will image all nodes to ESXi, but in my case I wanted to select nodes C and D to remain on AHV in ‘Storage Only’ or ‘Storage Node’ mode. This way I could have all nodes participate in the storage pool but only need to license ESXi on nodes A and B.

Once you click “Start” you can relax – it will take about an hour to complete the process. Note that if you aren’t changing AOS or hypervisor images at all, an install takes just a few minutes total (just applying your IP addresses).

Imaging nodes with different hypervisors (ESXi and AHV for “Storage Nodes”) at the same time !

Side note : of course the AHV nodes finish first! (Though no one is surprised right?! :) 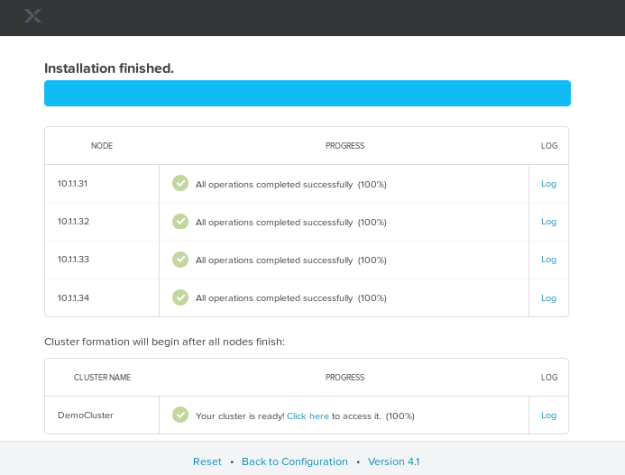 Foundation can import configuration files generated at https://install.nutanix.com. This can be used to generate a Foundation JSON file that can be imported into Foundation 4.1+ on site. You can create a configuration manually ,or if you have placed an order for Nutanix NX nodes, you can see your order and auto-populate the nodes (while the nodes are being shipped for example).

Below are some screenshots from the install.nutanix.com site. The idea is that the UI should look very similar to the normal Foundation process. 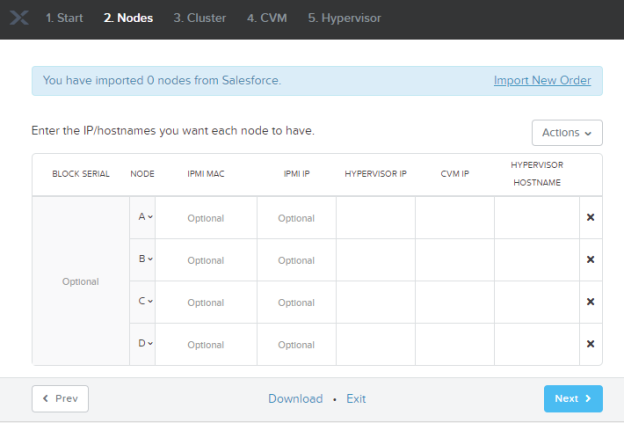 Note that the “Import New Order” function only applies to Nutanix NX orders. We are investigating ways to expand this to other appliance types in a future release.

Once you’ve completed the fields, click the ‘Download’ link at the bottom of the page to generate your JSON file.

Multi-homing is supported when IPMI configuration is skipped.

Foundation no longer fails if a NTP server is supplied but not reachable with AOS 5.6+

Nutanix Foundation continues to evolve. We’ve got some more UI changes and features planned around better networking options and more central deployment methods, with the eventual goal that anyone would be able to deploy their Nutanix cluster with any hypervisor they choose, any model of node they choose, in any configuration they want and eventually any cloud with just a few clicks, and in an automated fashion.

Would love to hear your suggestions and feedback on Foundation to make it better.

One of the little known options when using “Bare Metal” Foundation is doing so over a layer 3 network, instead of the traditional “same layer 2 network + MAC address” method.

This allows Foundation imaging of Nutanix nodes over a (good!) WAN link or across different subnets in your DC for example.

This method can be used to remotely ‘Bare Metal’ any hardware vendor platform running Nutanix via IPv4 – Nutanix NX, Lenovo HX, Dell XC, Software Only Cisco and HPE and others.

With this method you will copy AOS + Hypervisor image files over the network in parallel to each and every node – so consider available bandwidth and network utilisation as well as the AOS / Hypervisor image sizes that will be transferred from your Foundation VM to the nodes during the imaging process.

These files can be several GB in size. Foundation pushing images to nodes will time out after 15 minutes – so you will likely need a WAN link minimum of 50Mbit/s to copy the 4GB AOS file to a SINGLE node…and a better link if you are changing to ESXi (additional ~350MB) or HyperV (additional ~4GB) or if you are imaging more than one node.

If you have 4 nodes – multiply that by 4 of course. Clearly, this method is not for your small branch ROBO link. Use a tool like https://techinternets.com/copy_calc to see if your WAN link can handle the workload within that timeframe.

At time of writing you cannot modify the timeout setting.

In summary, ensure your network link is capable of respecting the timeout value taking into account the number of nodes you are imaging. For example, if you were imaging 4 nodes over the WAN, you will be copying at least 16GB in total over that link within 15 minutes.

If you had a 1Gbit link (or local 1 Gbit switch), 20 nodes would take ~12 minutes just for the AOS images. If you are imaging HyperV nodes, you could only image 10 nodes (as you need to include the 4GB HyperV ISO as well) on 1Gbit links. This is why old 100Mbit switches or USB adapters won’t suffice when you are imaging multiple nodes.

The above screenshot is from one node’s IPMI settings via BIOS. You would repeat this for each and every node you want to deploy, then use Foundation to image the nodes.

Below is a walkthrough of the initial screens in Foundation v4.1 for the Bare Metal via IPv4 process. Note that the IPMI addresses you type should match the IP addresses you’ve manually assigned to the nodes of course  :

We are also developing a “Foundation Central” microservice within Prism Central which will allow for ‘zero touch’ deployments at scale, including using a local (to the nodes) file store to avoid pushing files over the WAN – but for now this ‘bare metal’ method works if you have the luxury of bandwidth.

Here are some of the improvements in Nutanix Foundation 3.7 which was released on Feb 27, 2017.

You can now reorder blocks so that they are in the desired positions whilst keeping the IP addressing sequence intact. This is especially useful for large deployments.

A demo video illustrating the effects of reordering blocks (thanks YJ for the video):

Instead of automatic increments of IP addresses by 1, you can use a ‘+’ operand to create the sequence you desire. See below for an example.

You can now optionally select the timezone for your cluster at the Global Configuration page. 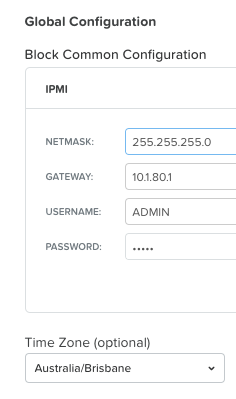 The Image Selection Page no longer forces you to upload a new images and instead use the ones already on the detected nodes.  You can also add/delete ISOs from the UI.

You can now use the UI to upload a Foundation tarball and update Foundation itself when new versions are available. It is highly recommended to always use the latest version, so it is easier to update. You can get the latest release notes and Foundation files from the Nutanix Support Portal. 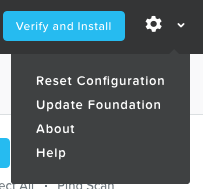 This is a great release by the Foundation Engineering team at Nutanix with over 70 bug fixes and improvements such as the above included. There are several exciting features coming in future releases (approximately every month) so always check the Nutanix Support Portal for the latest updates. If there is a feature you’d like so see, feel free to contact me.

Hopefully you will find some info here that will assist in your journey to making your IT infrastructure invisible. Email me: cameron - at - nutanix.com